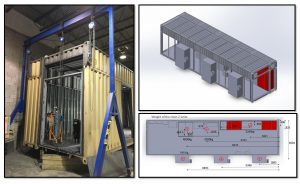 Mechanika carried out a detailed stress analysis of an Electrical Control Cabin which was situated in California. The assessments were executed in-line with EU and local California legislation and the structure was assessed to the requirements set out in the following design codes:

The local requirements for hurricane conditions specified by the client, was a wind pressure of 3355 Pa.

Mechanika were provided with the basic geometry in SolidWorks, which was then exported to RFEM5 for FEA analysis and post-processing.

Installed static and lifting load cases were considered for analysis.

The geometry was recreated in RFEM5 using beam elements and Orthotropic Shell elements to represent the corrugated steel panels. 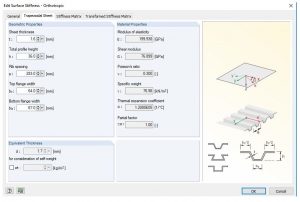 The assembly masses and sundry equipment items were converted to surface loads and hand calculations were used to determine support relations of the assembled equipment, which were then transposed onto the FE model for analysis. 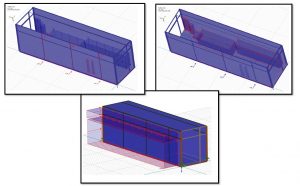 The analysis was computed and post-processed. The output result file was supplied to the client along with a detailed structural calculation report, including optimization recommendations, which were implemented by the client. 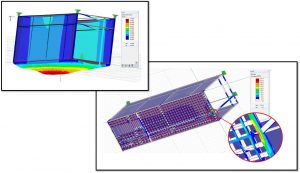